The way liberal-left opinion and much of the mainstream political class has turned its fire on the UK Independence Party (UKIP) over its latest poster campaign has been quite something to behold – and if I am not much mistaken it could play straight into UKIP’s hands. 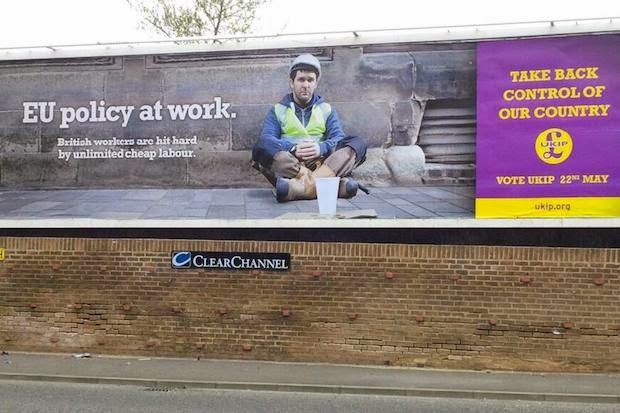 For me, this one above is rather good as a political poster, making a simple straightforward political point ('EU Policy at Work. British workers are hit hard by unlimited cheap labour') with a simple straightforward image. But it has been attacked with quite impressive outrage from all sides, bringing comparisons with Nazi propaganda and stimulating all from Tories to Greens to vituperation and anger. Tim Montgomerie, the creator of ConservativeHome website and now comment editor at the Times, even tweeted: 'Strong anti-immigrant poster campaign from UKIP', appended to the above photograph.

Another UKIP poster to have appeared overnight has the simple statement ’26 million people in Europe are looking for work. And whose jobs are they after?’ This juxtaposed to a finger pointing straight outwards at the reader (see LabourList editor Mark Ferguson’s tweet below - click on image if doesn't show fully).


THERE ARE TWENTY SIX MILLION PEOPLE AFTER YOUR JOB. This is not a spoof, this is the actual UKIP election poster. pic.twitter.com/Et1m8vmQhQ
— Mark Ferguson (@Markfergusonuk) April 21, 2014

No doubt, this one is particularly crass and takes a sledgehammer to any notion of accuracy or truth. But it is rather rich to see mainstream party figures ganging up with the voices of outrage against UKIP when this sort of mangling of the truth is a stock in trade for all parties in their generally vain attempts to find simple messages that resonate with the voters.

As you can see from the posters themselves, they are not racist or anti-immigrant or Nazi as Montgomerie and others have been claiming: to be so they would need to express racist, anti-immigrant or Nazi views. They are massaging and bending the truth to suit a political narrative. The outrage being expressed is really another example of a classic liberal shutdown narrative, in this case the one which attempts to associate negative views on mass immigration and the EU with racism, to delegitimise these views and to stop anyone saying anything that might possibly offend someone somewhere.

We really should have gone beyond this sort of thing, and encouragingly there have been signs lately that public debate has done precisely that.

That is one of the reasons why these outbursts of outrage could play straight into UKIP’s hands. For the more that voters see that the mainstream parties and their supporters are being unreasonable, shrill and trying to fool them, the more sympathetic they will become to UKIP’s attempts to posit itself as a Voice of Reason against an out-of-touch political Establishment.

That message resonates, be in no doubt about it. Making UKIP look sensible and reasonable is not a good strategy from the main parties and mainstream political figures, but this is what they are doing rather too often for their own good.

As for UKIP itself, it is clearly a mess of a party and surely can’t last as a coalition of refugees from the Conservative Party and working class former Labour voters. But they are doing a lot right.

UKIP's challenging of political orthodoxy is a good thing for democratic politics, as it shows that the way our political elite does things isn't inevitable and can be changed through our existing political system. They are willing to talk about democracy and accountability, and hold a torch up to the EU for lack of both. This is good too, and is resonating not just with voters in Britain but elsewhere in Europe too.

But as well as the Good, UKIP of course has Bad and downright Ugly aspects to it.

The Bad is its suite of classic right-wing policy positions, from a flat tax (which you will find in Putin's Russia) and its wish to cut up basic employment protections, to its antagonism to renewable energy and with that an outright hostility to any idea of man-made climate change. In so many ways, UKIP is on the wrong side of reasonable, sensible politics - and the party's attraction to alienated working class former Labour voters surely cannot last on this basis (It may not need to though if UKIP's operations in the north build up a critical mass, enough for them to split from the free market ideologues down south).

As for the Ugly, we have seen plenty of instances of craziness, genuine racism, anti-immigrant hostility and fraudulent behaviour from the people that have been getting selected and elected as UKIP representatives. But to the party's (general) credit, UKIP does seem to have a zero tolerance approach to these crackpots and is more than happy to get rid of them.

It reminds me of a meeting of my local Labour Party a while back, attended by a member of the anti-racist organisation Hope Not Hate, who gave a presentation and answered questions on UKIP. He said that his organisation had been grappling with the question of whether or not to target UKIP, and that the general feeling was that it wasn't actually a racist organisation (though from Hope Not Hate's website, it seems they have not stuck to this position).

There is a lot of hysteria going around about UKIP, especially on the liberal-left - and I think it is causing many otherwise-sensible people to lose their judgement and play into UKIP's hands. This may be no bad thing in the long run though. A few more wake-up calls - starting with the European Parliament elections on 22nd May - will surely follow.
ConservativeHome Establishment EU Hope Not Hate immigration Labour LabourList liberal mainstream Mark Ferguson Nazi posters racist shutdown Tim Montgomerie UKIP working class