Heathrow expansion: the monster which will never be sated

1) What sort of country (and indeed world) do we want to leave to our children and grandchildren?

2) Do we care about quality of life and, if so, what does it mean?

3) Are we serious about valuing our environment and the natural world, or are we happy to keep on despoiling and degrading them?

4) Are we serious about tackling climate change, and if not, are we prepared to face the consequences of it?

5) What priority does economic activity take in relation to these things, and is this priority indefinite or time-limited?

These questions seem pretty important and fundamental to me, but they are questions that hardly ever get asked in our mainstream political debate, let alone answered. We have a democratic political system, but it often seems more dedicated to avoiding big and difficult questions rather than confronting them.

Ironically perhaps, the latter point is not far from the position of the aviation lobby and its media supporters. They think that democracy gets in the way of decision-making and advocate ‘taking the politics out’ of or ‘depoliticising’ key decisions like that of where to build a new runway in the South East of England. That means taking the democracy out of it, so taking the role of ordinary people out of it. Ironically again, rather many politicians take the same line – people after all can be desperately inconvenient when you are trying to get something done.

Howard Davies has finished spending our £20 million on his Airports Commission report and came to the same conclusion he started with by recommending a new runway at Heathrow on the edge of West London, adding to the two existing ones there. Prime Minister David Cameron has said he and his people will read this rather large tome in full before coming to a decision by the end of the year on whether to go ahead or go for the other option of a second runway at Gatwick. There is also the potential – mentioned as likely by many political commentators – that there will be no new runway at all. 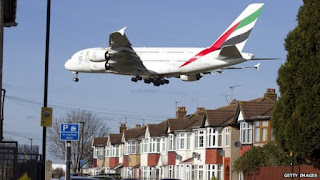 Labour has enthusiastically piled in on Davies’ side in advocating Heathrow, subject to the airport meeting targets on air quality and noise reduction which the report stipulates.

Already the problems with these recommendations are rising to the surface – not least that the Commission has grossly underestimated the publicly-funded cost of improving transport access to the hugely expanded site, which it has put at around £5 billion compared to Transport for London’s estimate of more like £20 billion. The commitments to air quality and noise reduction also seem desperately flawed. Once you’ve built an airport and are operating it, there’s not a lot anyone can do if it and the aircraft using it pollute a lot, make a lot of noise and operate flights in the middle of the night because of delays or just because they feel like it. There are exceptions to every rule, and Heathrow and its backers are expert at getting what they want.

The line of the aviation industry and business lobby is that London – and Britain – needs additional airport capacity. This is using words dishonestly for the sake of self-interest and ideology. There is no need for more runway capacity at Heathrow or Gatwick. That is to misuse the word ‘need’ as if it counts as absolute and objective.

The need for more capacity is that of businesses and lobbyists who stand to benefit from it. It is subjective and predicated on a particular future environment that would need that capacity itself to come into being. That environment which it promises is one that is more crowded, more stressed and more intensively worked – besides being more polluted and noisier for more people. The drive to intensification creates more intensification which drives more intensification. This is the economic system that we are attached to, and it is our democracy’s role to place strict limits on it – whether on airport expansion, employment legislation, wages or anything else.

This is about a lot more than whether to lay down a big slab of concrete where eight hundred homes are currently, or spreading aviation exhaust fumes and noise over whole new swathes of London and the South East of England.

Labour’s decision to go along with the safe, generalised, Establishment consensus by advocating Heathrow expansion is not a surprise.

We hear a lot of blather from Labour about ‘Labour values’, but underlying that we find a largely empty space when it comes to any version of the good life on which to base those values. There is a vague, airy kind of version that people hold roughly equating to the vision in John Lennon’s song ‘Imagine’: that if everyone was like us and there was no religion and borders, then the world would live as one and everything would be fine.

The left’s vision of the good is too often permanently stuck over the horizon like that, conditional on us doing all the things that we need to do to bring it to that undefined ideal state. We never get there. If we were more honest we’d admit that we haven’t given it much thought what it would mean to be there.

As a result perhaps, Labour too easily falls into a sort of lazy consensus mode on big questions like this, going along with the generalised consensus view which is generally based on economic considerations (those promoted by vested interests) and little else.

But it is for democratic politics to decide whether it wants to keep feeding this monster – and funding it too. We know what its side-effects are, whether at Heathrow or Gatwick – loss of land, housing and natural habitat, increasing noise, pollution, congestion and the concomitant need for more roads and other infrastructure; also more people coming in which creates additional pressures on these things and public services too. (That is not to mention global heating through carbon emissions - and perhaps there was a message in Heathrow registerng a British record high July temperature of 36.7ºC on the day of the Airport Commission report.)

This drive to more and more is the dominant political movement of our times - a 'stealthy form of authoritarianism' as I have called it before. But sometime, somewhere along the line, someone needs to ask: “What is all this for? What are we actually trying to achieve here?

It seems to be just about there being more money around, and that isn’t a good enough reason for me.

June 02, 2014
This is the third part of a four-part essay applying the ideas of Karl Popper to ideologies that have secured particular social power in our contemporary world. Part I presents a context in which Popper has been widely misappropriated by the right, and argues that he should be reclaimed by the liberal-left – not least because he was liberal and of the left . Part II builds up the substance of his critique of Hegelian and Marxist ideologies and explores how contemporary political Islamism is largely based on these theories. Part III here explores the rise of ideological feminism, with a particular focus on Laurie Penny’s writings and the strong feminist movement within the Labour Party. As Islamism takes the Muslim, feminism takes the woman as a centre of importance and basis for political action. There is nothing wrong with this; indeed there is nothing necessarily wrong with politicising any identity group. It is clearly necessary in situations where we
Read more