March 22, 2018
Imprint Academic has made available some details of my book, The Tribe: the liberal-left and the system of diversity, on its website here. 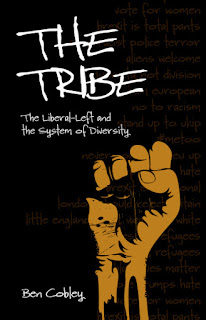 From Islamist terror to feminist equal pay campaigns and the apparent Brexit hate crime epidemic, identity politics seems to be everywhere nowadays. This is not entirely an accident. The progressive liberal-left, which dominates our public life, has taken on the politics of race, gender, religion and sexuality as a key part of its own group identity – and has used its dominance to embed them into our state and society.

In The Tribe, Ben Cobley guides us around the 'system of diversity' which has resulted, exploring the consequences of offering favour and protection to some people but not others based on things like skin colour and gender. He looks at how this system has almost totally captured the Labour Party and continues to capture other major institutions. He also looks at how it is capturing our language, appropriating key terms like ‘equality’, ‘tolerance’ and ‘inclusion’, while denying a voice to its outsiders.

The system of diversity makes a challenge to us all: submit, or risk exclusion from society itself.


The website page states that publication date will be 1st July this year, but my understanding has been that it will not be available until later than that. I will update will any further details.

Update: the publication date should be 1st July as listed.

I wrote a few more words about the argument here.