A response to David Lammy

May 02, 2020
In his recently-published book Tribes, the Labour MP David Lammy, newly-appointed as Keir Starmer's Shadow Secretary of State for Justice, makes a number of accusations against me based on a reading of my book The Tribe.

As you can see from the passage below, Lammy calls my book "conspiratorial", saying that I "chastised" his words in responding to the Grenfell Tower disaster "as an example of identity politics' most flagrant excesses".

However, if you read the passage from my book that he quotes afterwards, I think you will find none of that.

I certainly didn't set out to chastise him or anyone else in the book.

Rather, I was seeking to describe how progressive identity politics (or the identity politics of the 'liberal-left' as I describe it in the book) has become so utterly normal that a senior politician can respond to a deadly fire by putting not just skin colour, but gender, front and centre of how he responds to it and what he demands of the state and wider society in its response.*

I put Lammy's response to the Grenfell Tower disaster at the start of The Tribe because it was a good example of how people on the progressive liberal-left now see the world through this framework of identity; through the prism of good and bad identity groups; victims and oppressors.

As I wrote in the Preface of the book,


I wanted to look at how the liberal-left operates on a daily basis, through the voices of its major figures, in the words of its activists and supporters, and through the practices of 'institutions of diversity' like the Labour Party, the Guardian and the BBC. I critique what is said and done, sometimes forcibly. However, the point is not to blame individuals but to extract examples of typical, customary practices - and show how they fit together.

This is the opposite of the 'conspiratorial' approach that Lammy condemns me for. Rather, I was trying to show how the system of diversity and its base of knowledge about identity-based oppression is "a form of society," which "brings people together and gives us a way of relating to each other." 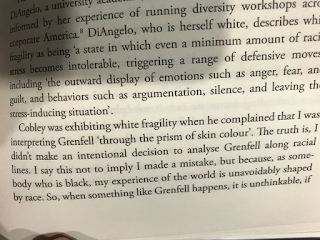 Lammy actually gives a great demonstration of this at work in the passage to the right here, in which he accuses me of "white fragility" based on the theory of an American academic who runs diversity workshops - so reducing my work to an emotional state based on my skin colour - a textbook example of identity politics assigning negative traits to unfavoured groups.

However, more interesting is the sort of half-confession that follows in which he describes how he "didn't make an intentional decision to analyse Grenfell along racial lines"; and that, "as someone who is black, my experience of the world is unavoidably shaped by race."

Like his accusation of 'white fragility', this is an expression of racial determinism; of apparently necessary submission to certain responses based on one's skin colour (contradicted by his academic who has gone the other way). If he didn't make "an intentional decision", it must have been something else - a determinism of identity in which our thoughts are not not intentional, but prescribed by the world; a consequence of experience "unavoidably shaped" by such things as skin colour and gender.

Our agency and ability to think and decide for ourselves are gone.

For me, this little passage of Lammy's is a really good personalised account of how 'the system of diversity' works. It appears to be an honest attempt to describe accurately what was going on in his mind and in his world when he appeared in front of the cameras at Grenfell. And what was going on was that he wasn't thinking so much about the event as slipping into a conditioned response; of submitting to the same way he responds to other events, of allocating his response to what he describes as his own experience.

In the process he was shedding his capacity to decide for himself, to evaluate this particular event on its own merits. For him, simply because the vast majority of victims at Grenfell were not white-skinned people of British ethnicity, then it fitted the same old stories about victimhood and oppression, of good identity groups who need protection and representation against the bad identity groups who oppress them.

He could slip into this response without even thinking.

This is what I mean by 'the system of diversity' at the basic, existential level. It is something we fall into, that is easy and available; comforting even. It tells us stories which are simple and familiar, which provide easy answers to often difficult questions.

It's not a conspiracy, but a way of life.


* I think we can see similar things going on now with the political (and also institutional, state) response to the Covid-19 virus - with many liberal-left politicians and activists claiming it as an example of systemic racism at work given that people of non-white British ethnic backgrounds appear to be more affected.
Ben Cobley conspiracy Covid-19 David Lammy Grenfell identity politics Keir Starmer Labour Party liberal-left racism system of diversity The Tribe Tribes white fragility