Showing posts from January, 2018
Show All

On Brexit and the arts, Part II

I am continuing to see a lot of wailing and moaning about Brexit from the classical music and wider arts Establishments and thought it was worth a further word or two following my previous blogpost on Brexit and the arts , which seemed to go down well with a few people. Barely a month seems to go by without another letter signed by the great and the good of the arts world railing against everything to do with Brexit and demanding that the government either cancel or dilute it so that the status quo is maintained. Moreover, we find major arts figures seemingly using every opportunity presented by their privileged public access to attack Brexit, implicitly or explicitly, as nasty, bigoted and nationalist. I have mixed feelings about this. On the one hand I reject the idea that artists shouldn’t get involved in politics. The arts are part of the public world and therefore part of politics. To artificially separate them off from politics is itself a political act, an act of cont
10 comments
Read more 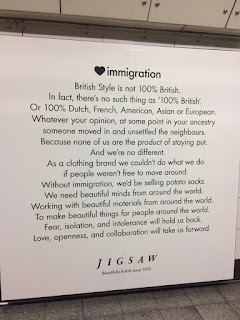 On one level Virgin Trains’ decision to stop selling the Daily Mail is quite a trivial matter. The company is a private business and can decide not to sell whatever it likes. But there is also a serious aspect to this, for it shows how some of our major public-facing organisations (including businesses like Virgin and the retailer Paperchase ) are explicitly taking the ‘progressive’, liberal-left side in our Culture Wars, and using what control they have over public space to stop the views of opponents from appearing. According to the story in PR Week , Virgin Trains announced its decision in a memo to staff last year, saying, “There’s been considerable concern raised by colleagues about the Mail’s editorial position on issues such as immigration, LGBT rights, and unemployment. We’ve decided that this paper is not compatible with the VT brand and our beliefs. We won’t be stocking the Daily Mail for sale or as a giveaway.” As we can see, the statement is explicitly poli
2 comments
Read more
More posts